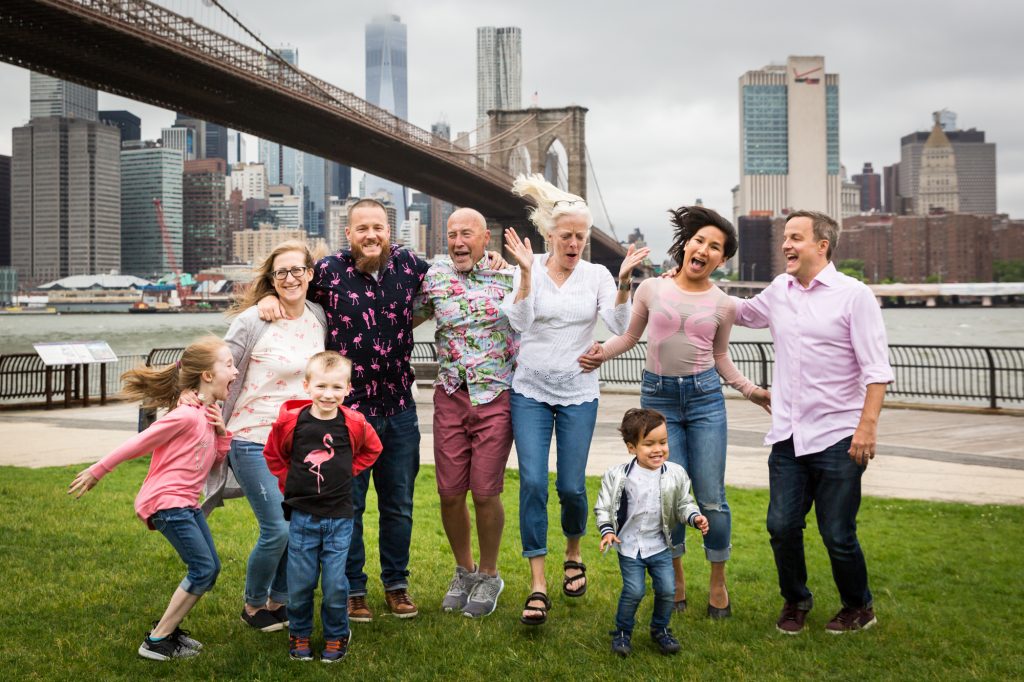 Are overcast skies good for photos?

The short answer is yes…and no. While overcast skies can help defuse the light and make colors pop, there is a tipping point where photos go down the hill. In today’s blog I take a look at the myths and realities behind overcast skies during a Brooklyn Bridge Park family portrait session. Please meet Nick and his brood who I had the pleasure of photographing in May. This was one of my most fun family portraits, despite the obvious bad weather. I was nearly blown away on the waterfront while waiting for Nick and his family to arrive for the family portrait. Because his family was coming in from another state, we didn’t have the choice to reschedule. I’m actually glad we stuck it out, because the resulting photos were fantastic and the family had so much fun defying the weather and making faces in front of the camera.

So here is the truth about overcast skies: when clouds are covering the sun, it helps to diffuse the sun’s rays and creates even lighting. Despite the gray you may see in the sky, the diffuse lighting makes colors pop and cuts down on any bright highlights — a cardinal sin in photography.

Worse than too little light is having too much light. When the sun is at its brightest in the middle of the day, it is also at its most harsh. The extreme contrast between light and shadow can be used creatively, but in general you want soft, even lighting for any type of portrait. And if you have ever taken photos in the middle of the day, then you know the horrors of having dark shadows under your eyes because the sun is directly overhead. No one needs that. This is why I always recommend scheduling a shoot during ‘golden hour’ — either one hour after sunrise, or one hour before sunset.

Overcast skies change the need to adhere to the golden hour rule, however, since the cloud cover is diffusing the harsh sunlight for you. Hence you don’t need to worry as much about the time of day for your portrait session when clouds are present. The number of clouds in the sky, however, is a key factor you need to bear in mind. Here’s the deal: a little bit of diffusion is good, but complete cloud cover leads to dull, flat light. My rule of thumb is that if you can see the outline of the clouds, then you are in luck. You may not have much light in the sky, but you will have something interesting in the background. It’s on a day like we have seen many of in New York when the clouds obliterate any light in the sky that you get a less than ideal shoot.

But just because there is heavy cloud cover, it doesn’t mean your portrait session shouldn’t happen. Honestly, unless it is actively raining, I would go ahead with the photo shoot. Take for instance Angii and Paul’s Montauk Lighthouse wedding. The photos would of course have been better with better light, but the stunning views of the ocean more than make up for the cloud cover. And that leads me to Nick’s Brooklyn Bridge Park family portrait. The portrait was scheduled for 11:00 a.m., which is dangerously close to high noon. You would ever know this, however, because of all the clouds overhead and intense wind. Honestly, if we could have rescheduled the shoot we probably should have, just because of the threat of rain. We persevered, and the rain held off. This group was so much fun to photograph, mainly because they were such an active bunch! They danced, they sang, they even wore flamingo-themed T-shirts in a photo – which I have to say was very brave of them since it was so cold that day. And I should note that the family originally ordered custom T-shirts for the shoot, but due to a delivery mix up, the T-shirts never arrived. A flamingo theme was the perfect substitute! (Any family that has coordinating flamingo T-shirts in their closet, is my type of family.) The grandmother is an avid yoga practitioner, and I could not let those skills go to waste. This photo at St. Ann’s Warehouse is one of my all-time family portrait favorites. Likewise, this photo on the back brick wall of the theater is another favorite of mine. So learn from Nick and his family and don’t let a little bit of cloud cover get you down. You can still make lemonade out of lemons, so to speak, and get some great photos even on a cloudy day. Drop me a line if you are interested in scheduling a Brooklyn Bridge Park family portrait — come rain or shine.

If you would like to see more images from my family photojournalism portfolio, then please visit my website — KellyWilliamsPhotographer.com