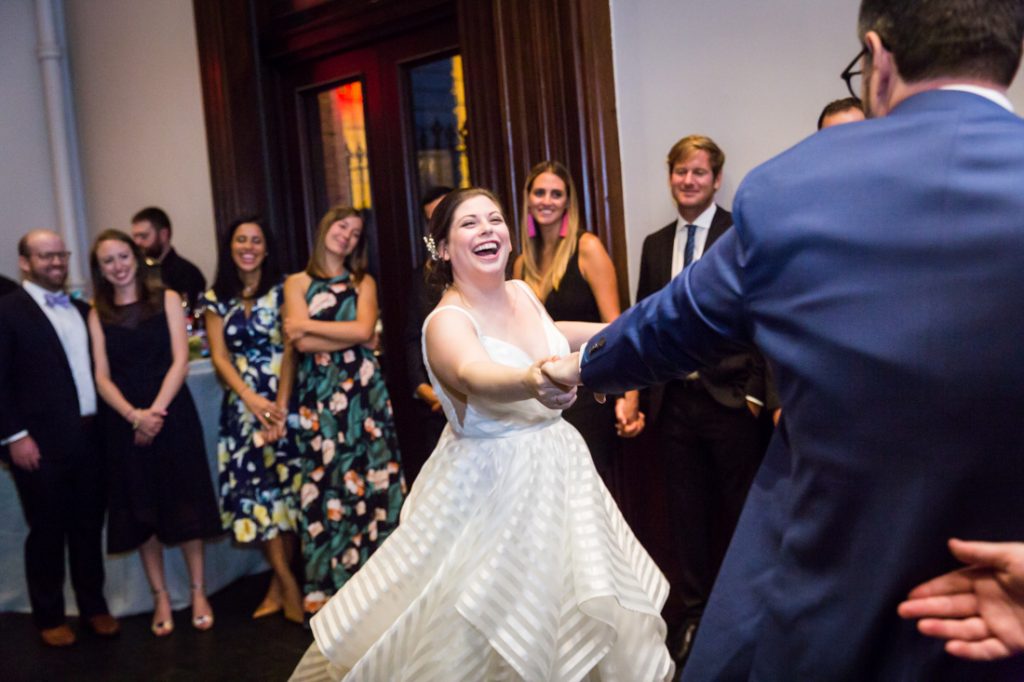 Love (and DIY Flowers) in Bloom

Think you need a florist for your upcoming Brooklyn Historical Society wedding? Not so, says bride Sasha, whose crafting skills were in abundance at her beautiful wedding to Jonathan. Get all the details on their slow blooming love affair in today’s blog.

When Sasha met Jonathan many years ago at work, they hated each other. It took about a year, and then they began to see each other in a whole different light. After a few years of dating, it was on a long road trip from Austin to Las Vegas that Jonathan finally asked Sasha to marry him. It’s near the end of their epic adventure, and the couple are poised on the edge of the Grand Canyon.  Here, on New Year’s Eve, Jonathan asked Sasha for her hand in marriage.

She of course said yes, and this leads to their fantastic wedding on August 25th. For this couple, tradition was thrown right out the window in favor of doing their big day, their own way. The wedding started at the go-to hotel in the Borough Hall area, the New York Marriott at Brooklyn Bridge, where Sasha was getting ready. It was a chaotic, but fun, atmosphere where family members, makeup artists, and hair stylists were all clamoring for the same window light (and outlets). Everyone got ready on time, and Sasha and I headed out the door to meet Jonathan for the first look.

As tried and true Brooklynites, Sasha and Jonathan had requested to have their first look at Borough Hall. The courthouse is an iconic building, but I made sure to schedule the first look near the fountain so that anyone sitting on the steps of the building would not be distracting to the couple (or the camera). In addition, adding distance between the camera and the building allowed me to show it in all of its glory in a wide shot. Our light for the day was beautiful, and I made sure to use the direct sunlight as a natural spotlight for Sasha and Jonathan dancing on the sidewalk. Next on the agenda was a quick walk down Montague Street to the Brooklyn Historical Society. We had originally planned to take additional portraits on the Brooklyn Heights Promenade, but Sasha and Jonathan were both worried about time and family arriving early. Sure enough, all of the family arrived to the Brooklyn Historical Society about fifteen minutes ahead of time. Not a problem at all, as I used the time before they arrived to snag some private moments with the couple in the library. Sasha and Jonathan are both huge readers, so this series of portraits meant a lot to then.

We knocked out the family photos on the steps of the beautiful brownstone adjacent to the Brooklyn Historical Society. Technically, this is not allowed, but we were quick and there were no angry neighbors to chase us off of the property.

Signing of the ketubah was next on the agenda. Sasha is Jewish on her father’s side, and wanted to honor his heritage with both the ketubah signing and the breaking of a glass during the ceremony.

Speaking of which, it was a beautiful – though non-traditional – Quaker-style wedding ceremony. This is my second Quaker wedding. In case this is new to you, in Quaker weddings free-form speeches are given by guests, and there are no religious aspects to the ceremony. Sasha and Jonathan’s wedding ceremony did include the normal saying of vows, exchange of rings, and a final kiss, though not all Quaker-style ceremonies do include these rituals. Jonathan’s sister did a wonderful job as the officiant, and had the pleasure of declaring Sasha and Jonathan man and wife. (By the way, if you will be having a family member or friend be your wedding officiant, then don’t forget to read my article, ‘How to Become a Wedding Officiant in NYC.’)

The cocktail hour festivities spilled out from underneath the grand staircase to the outdoor patio. During this time guests picked up their place cards: a DIY love gift from Sasha. The package – styled with old card catalog index cards – included a bottle of olive oil, matchbooks, and a cartoon.

This would be a good time to make special note of the paper flowers and bridal bouquet made by none other than the bride herself. As Sasha put it, it took hours to make all of the little flowers, but thanks to Netflix, she got through it and was able to make enough flowers to be used as centerpieces on all of the reception tables as well as her own fabulous bouquet.

The reception had a great party atmosphere the entire evening, and led off with the bride and groom’s elegant first dance. Sasha and Jonathan put in many hours of practice on the dance floor, and it showed with their final bow. The evening also included a hora which, as you can see from the look on Jonathan’s face, was not his favorite dance.

The toasts were taken care of during the ceremony, and there was no bouquet toss or cake cutting. Just pie. Lots and lots of pie. Yum.

Enjoy the photos of this Brooklyn Historical Society wedding, and if you have a love story as unique as that of Sasha and Jonathan, then give me a call. I would love to tell your story.

Makeup and hairstyling for bride and family – Glam Squad

If you would like to see more images from my portfolio, such as these Brooklyn Historical Society wedding photos, then please visit my website – KellyWilliamsPhotographer.com