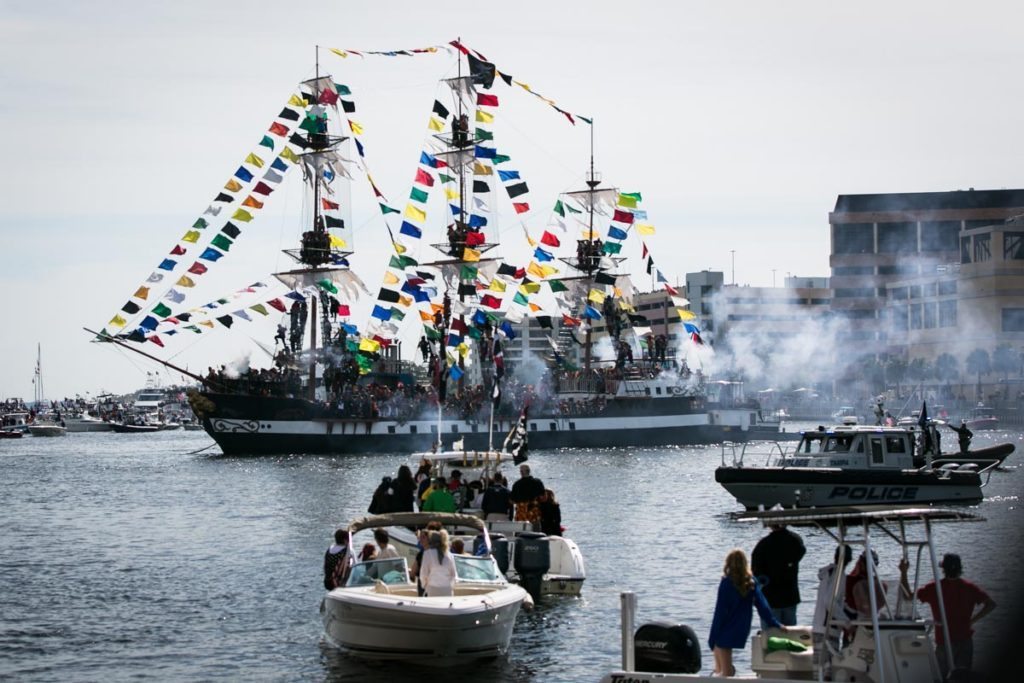 Hi everyone!  The Gasparilla 2015 Pirate Parade was held today in Tampa, and I am pleased to say I was there to catch all the action.  The festival has been going strong since it was first held in 1904.  With a look and feel a bit like Mardi Gras in New Orleans, the premise of the festival is a celebration of legendary local pirate, Jose Gaspar. The highlight of the festival is today’s parade, which starts with a mock invasion by Jose Gaspar and the members of Ye Mystic Krewe of Gasparilla as they sail into Tampa Bay aboard a 165 foot long ‘pirate’ ship — the Jose Gasparilla — which was built in 1954 specifically for the celebration.  The pirate ship is accompanied by a flotilla of local boats, and parking can be a bit tricky out on the water. Once the ship reaches the Tampa Convention Center, the mayor of Tampa — Bob Buckhorn — relinquishes the key to the city to Jose Gaspar, and a ‘victory’ parade for the pirates commences along Bayshore Boulevard.

As with Mardi Gras, participants in the parade throw beads, coins, and other trinkets to the crowd.  Cannon fire is heard constantly as the krewes are known to be a rowdy bunch.  Indeed, there have been complaints over the years about the level of intoxication and debauchery.  As a result, the city created a much more family-friendly children’s pirate parade, which is held the weekend prior to the larger parade.  But For the record, what I saw out on the streets wasn’t all that bad with the exception of a few completely drunk souls who were being carried away by friends.

Enjoy the pics, and if you would like to see more examples of my work, please visit my website portfolio.