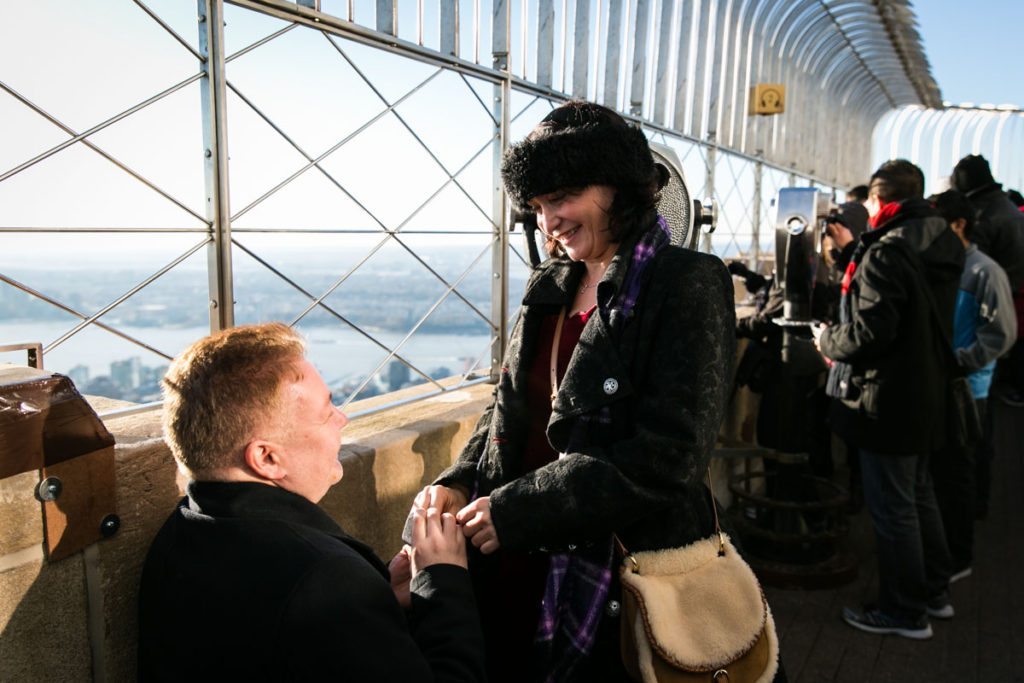 I had the pleasure of photographing a classic New York moment on Sunday: my first Empire State Building proposal. Let’s get all the details of when Jacky said ‘yes’ to Paul in today’s blog post! Paul lives in the UK, and contacted me a few weeks ago about surprising his girlfriend, Jacky, with a proposal.  We scheduled a Skype call and made our plan. While Paul and Jacky had talked about marriage — and in fact were going to be coming from Tiffany’s to pick up their ring — Jacky had no idea where or when the proposal would take place.  The plan was for Paul and Jacky to arrive on the 86th floor of the Empire State Building, where I would be surreptitiously waiting.

As he and Jacky stepped off the elevator, Paul and I made eye contact.  I grabbed my biggest lens (Canon 70-200mm f/2.8 with 400mm extender), and played the dutiful role of tourist with the big camera as I stalked them around the observation platform.  It took a few minutes, but when the crowd of tourists abated, Paul seized the moment and dropped to one knee with the ring in his hand.  She said yes!  Jacky immediately started crying, and was absolutely surprised by the whole situation — including my presence.  This was truly a lovely moment, and one of my best photographing experiences. After the proposal, Paul, Jacky and I went up to the 102nd floor to take in the view.  We then checked out the windows at Macy’s, and finally took a few shots at nearby Madison Square Park.  It was a great day, and I wish these two kids the very best.

If you are thinking about recreating this classic New York moment yourself, a few words of wisdom: first, make sure you buy the express pass.  The pass allows you to bypass all of the lines and head straight to the observation platform.  It took me a total of fifteen minutes to get the to the top.  Compare this to the rest of the tourists waiting in line for at least two and half hours.  The pass costs $69 online, and it was worth every penny.

Second, let’s talk about timing.  We arrived at the Empire State Building at 2:30 p.m., which was great in terms of lighting as the sun sets around 4:30 p.m.  The truly perfect amount of light would have been a bit later — at around 3:15 p.m. — but if you time your proposal for that late, you then run into the issue of not having enough light afterwards if you plan on engagement photos.  Light runs out quickly, especially in the winter.

Interested in arranging an Empire State Building proposal?  Drop me a line and let’s talk about your photography needs.

If you would like to view more happy couples, such as Paul and Jacky during their Empire State Building proposal, please visit my website — KellyWilliamsPhotographer.com. Finally, bring lots of patience for both the tourists and the weather.  If it is slightly breezy on the ground, you can be assured that you will be assaulted by full gale winds at the top of the Empire State Building.  Dress accordingly, and tie that hair down!