How to Plan a Surprise Marriage Proposal 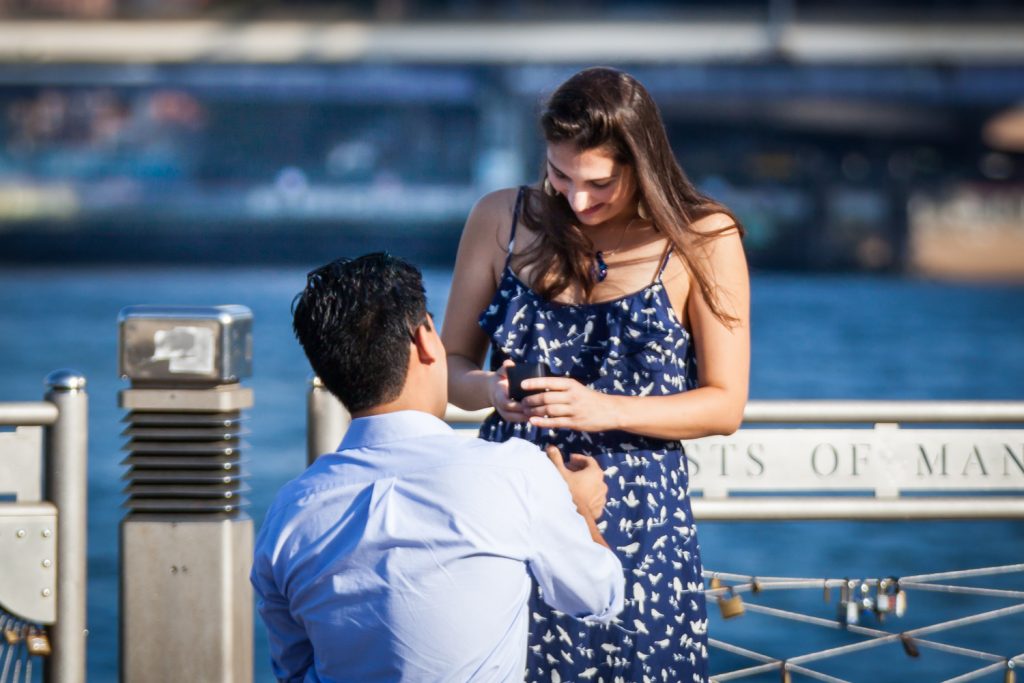 Setting up a surprise marriage proposal always makes me feel like James Bond. With a plan in play and our watches in sync, find out how I conspired with Mark to pull off the perfect proposal to Elena at Brooklyn Bridge Park. 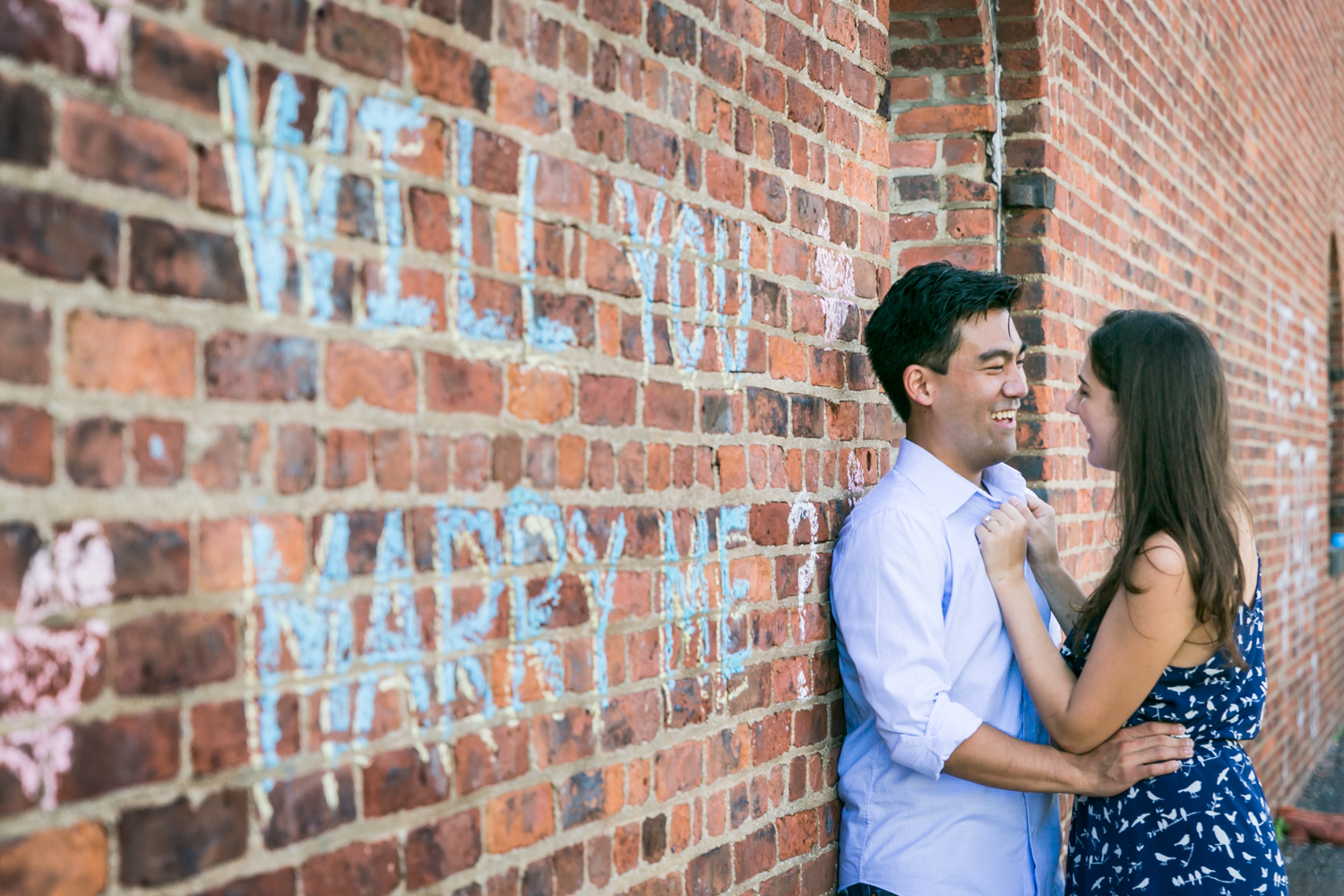 So, it’s time to ask your beloved to marry you. How do you pop the question AND get it on camera? The exact words and way in which you ask are completely up to you. A personal touch is always best, and your proposal should be an extension of you two as a couple. For instance, do you both like to travel? Then plan a destination with the proposal at the end (or beginning) of the trip. Are you big fans of video games? Then do what Jonathan did and ask Meredith to marry him with a Game Boy-style ring box after a night of belting out karaoke.

No matter how you ask, the getting it on film part is my job as your photographer. First, let’s talk about location. If you want to surprise your other half and have every moment photographed, then ideally you would pick a location where me carrying a large camera is no big deal. Somewhere tourist-friendly, that walks the fine line between too crowded (Times Square) and too empty. I and my large lens (since I will be photographing you from a distance) need to blend in with the crowd. I’ve been on the top of the Empire State Building and in Central Park with much success. In Mark’s case, he chose Brooklyn Bridge Park because it has a beautiful view of the NYC skyline. He and Elena live in Washington, DC, so this was the perfect spot both in terms of being tourist-friendly and because NYC is a destination that they both love. 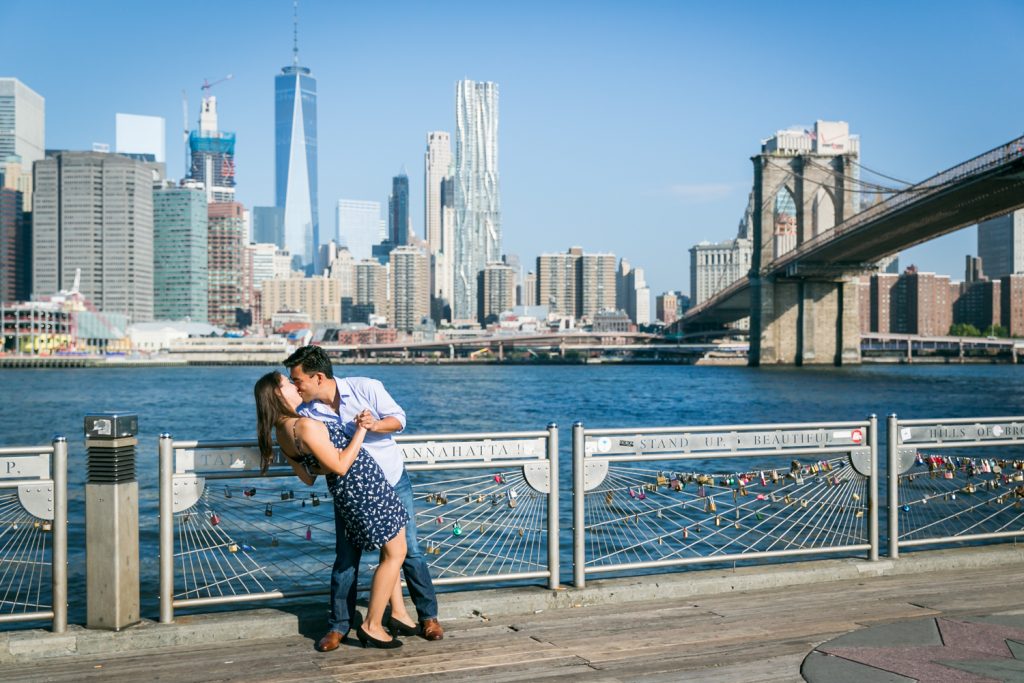 Timing also needs to be a factor in your plan. As you know, I always advocate shooting during ‘golden hour.’ This may or may not be possible for your schedule. Mark’s shoot was scheduled for 8:00 a.m. both to catch the morning light and to avoid the afternoon crowds at the park. As luck would have it, the weather cooperated fully and we had beautiful light and the park entirely to ourselves. While the park was a tad empty for me to hide in, there is a bar on the ferry dock of Brooklyn Bridge Park that I was able to jump behind. Bottom line, aim for the best light for your shoot, and if that doesn’t work with your schedule, then aim for the best time to hide your photographer.

My advice to everyone about to ask is to do it quick. If you have a surprise proposal, do not make an elaborate plan before you ask. In other words, if you plan to be at the park by 8:00 a.m. to surreptitiously meet your photographer and propose, you should be down on one knee by 8:05 a.m. at the latest. A lot can go wrong when elaborate plans are made. Case in point, for Mark and Elena’s shoot, we had agreed to meet at 8:00 a.m. in Brooklyn Bridge Park. I had prearranged with Mark that I would be sitting on the bench in front of the Brooklyn Ice Cream Factory. He was to walk past me, onto the deck, and ask Elena to marry him. Great plan, bad Uber driver. Their driver took Mark and Elena to the other Brooklyn Ice Cream Factory located in Williamsburg (about fifteen minutes away from where they needed to be). No big deal, and everything ended ok, but this just goes to show that problems can arise so don’t put a lot of time between the time you meet with your photographer and the time at which you propose. 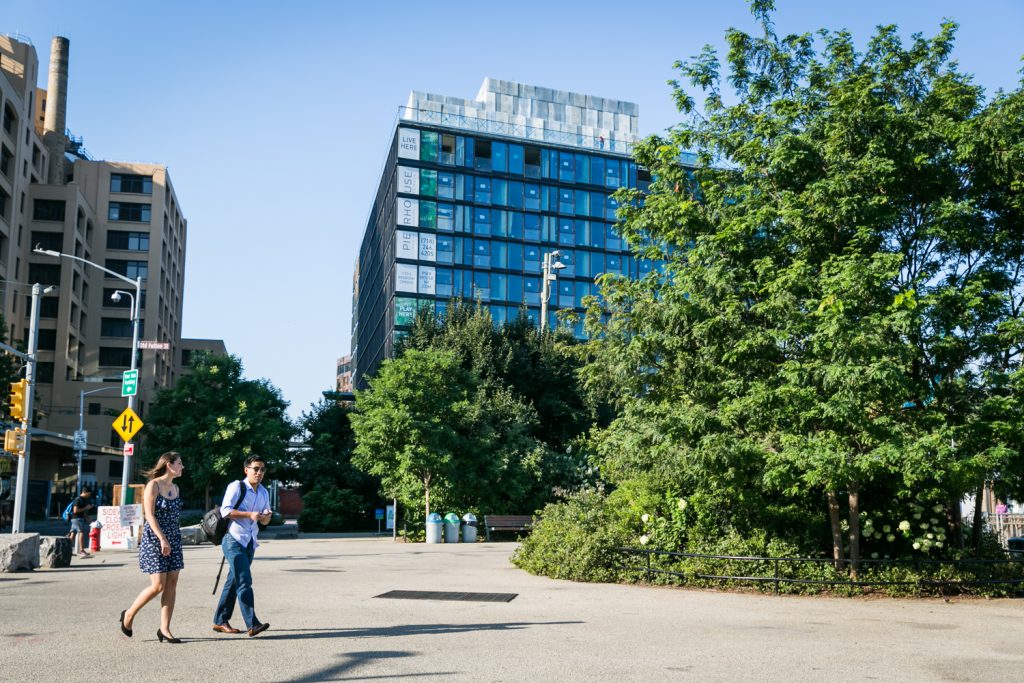 And speaking of prearranging, lots of work behind the scenes went into Mark’s proposal. In addition to our initial phone call, we met in person so both of us knew what the other looked like. This is crucial to a surprise proposal. If you can’t meet beforehand, then you should at least Skype so that you can physically identify your photographer. In addition, props are helpful. I had a client from the UK who I met for the first time at his proposal on the top of the Empire State Building. We had Skyped beforehand, but I was doubly sure it was him by the small Tiffany’s blue bag he was carrying. As with all my shoots, I always check in the night before via email. And with my surprise proposals, I include a detailed description of what I will be wearing so I am even more easily identifiable.

Make sure you have a secure and quick method of communication between you and your photographer. For most people this will be texting, but if you are coming from abroad, then have a What’s App account or accessible email on your phone so that you can be in quick contact with your photographer should any emergency occur. 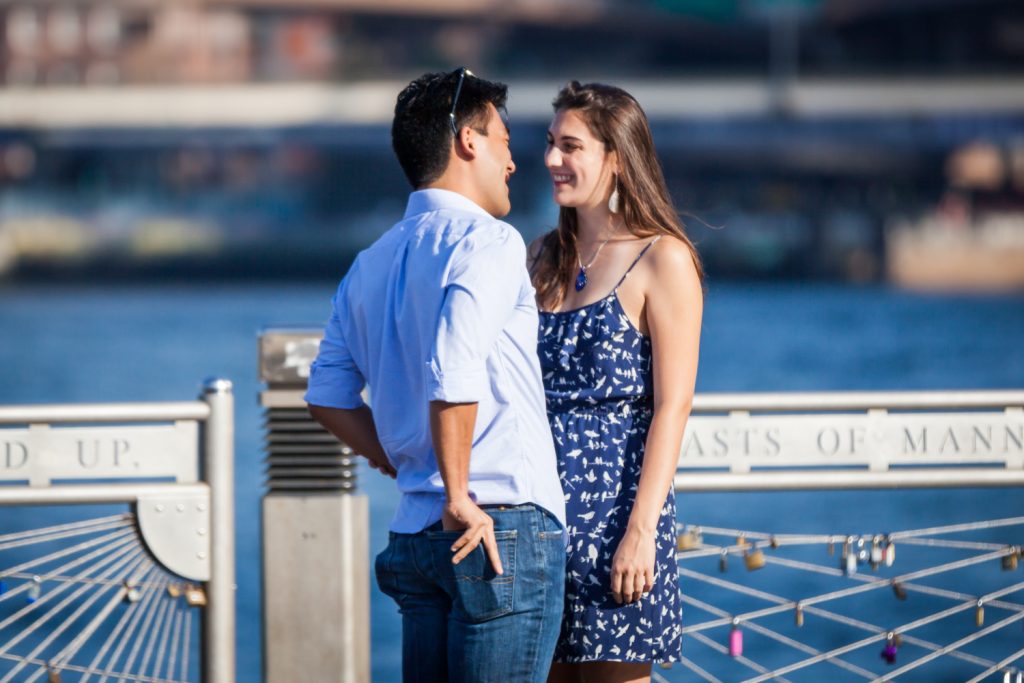 Finally, have a plan for after the proposal. In Mark and Elena’s case, I gave them a few moments to themselves, and then we launched into an official engagement shoot along the Brooklyn waterfront. Depending upon how your other half deals with surprises (and photo shoots), you may want to just do the proposal and then have an engagement shoot at another time when you both have a chance to get dressed up or select a different location. In either case, tell your photographer how you think the shoot will end in order to be prepared.

And that’s all it takes to ask someone you love to marry you. What are you waiting for? 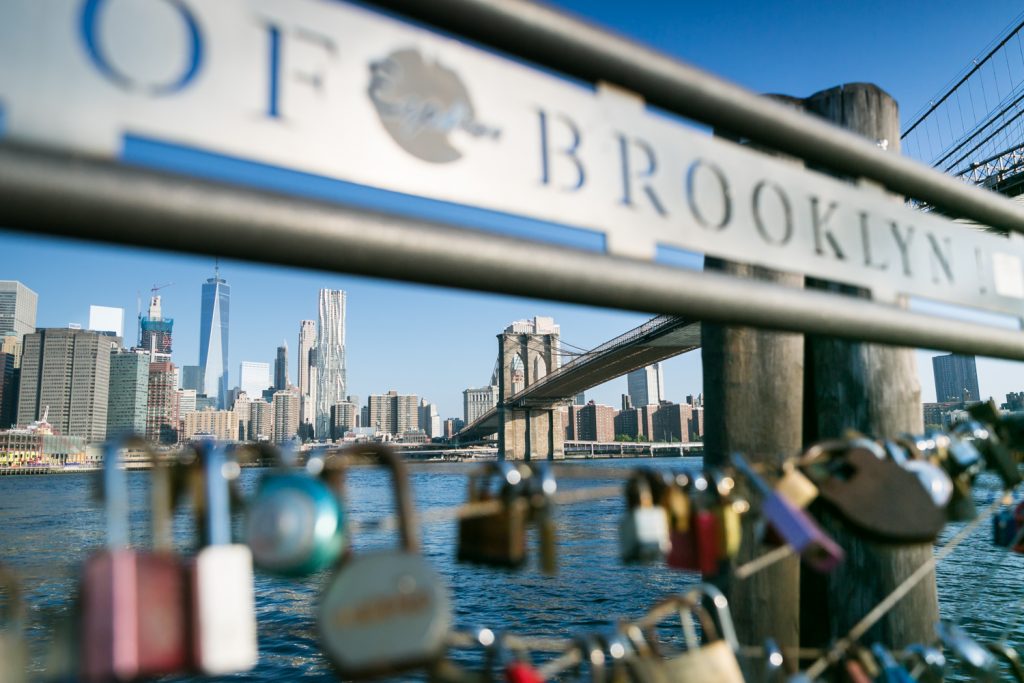 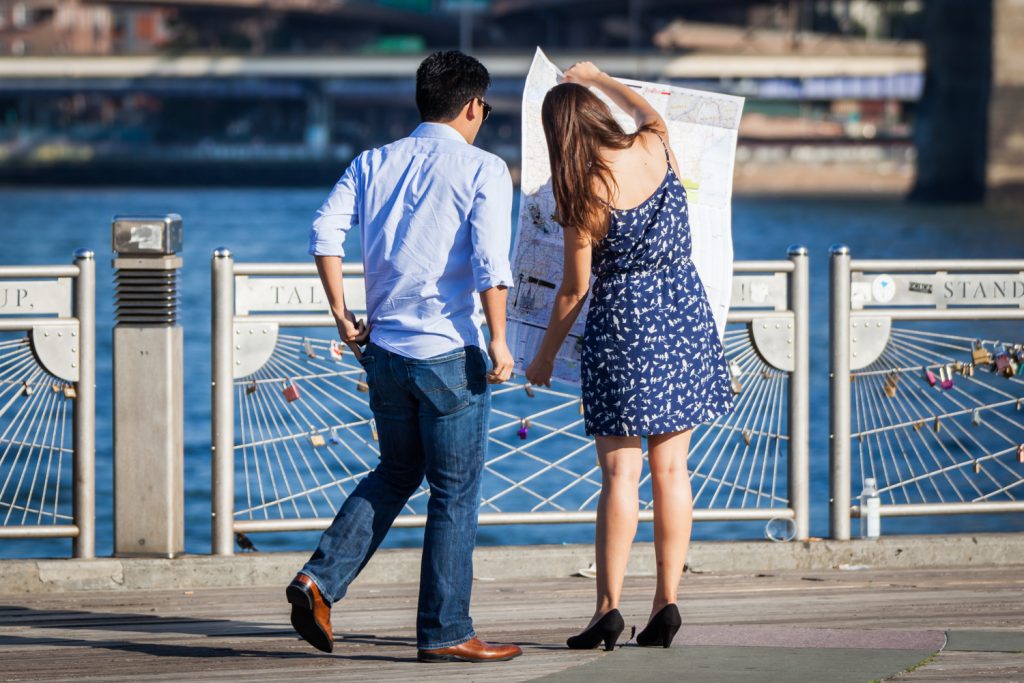 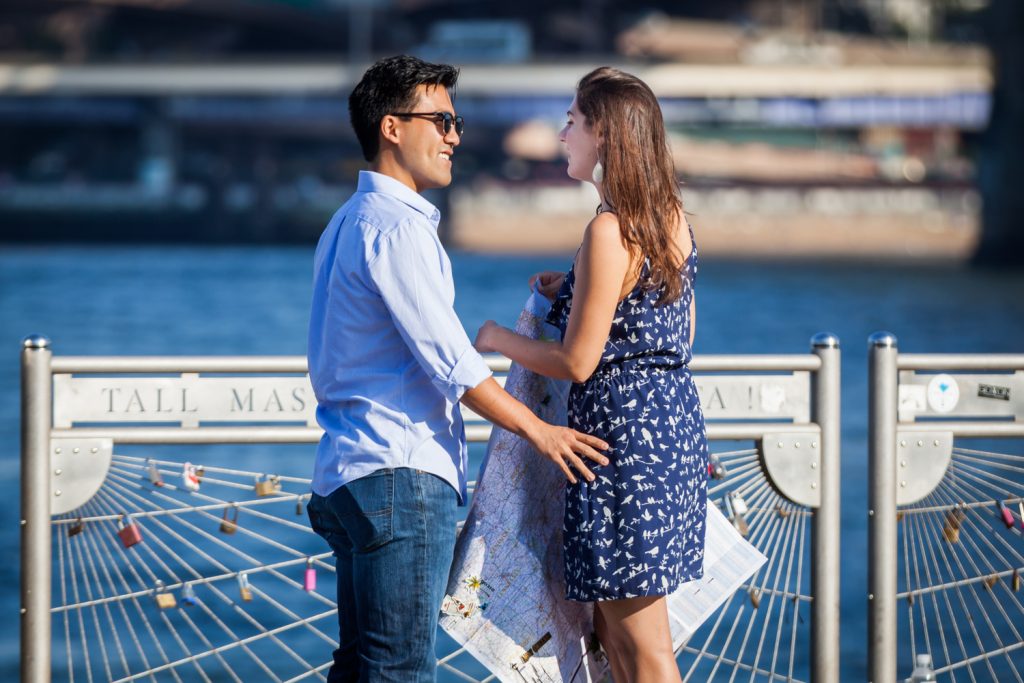 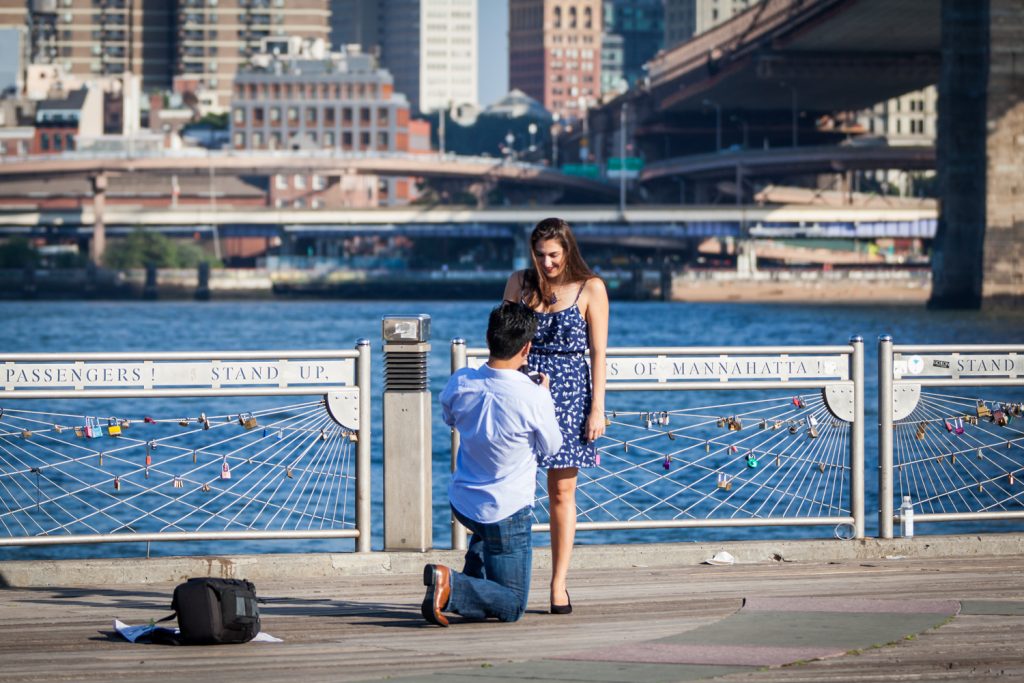 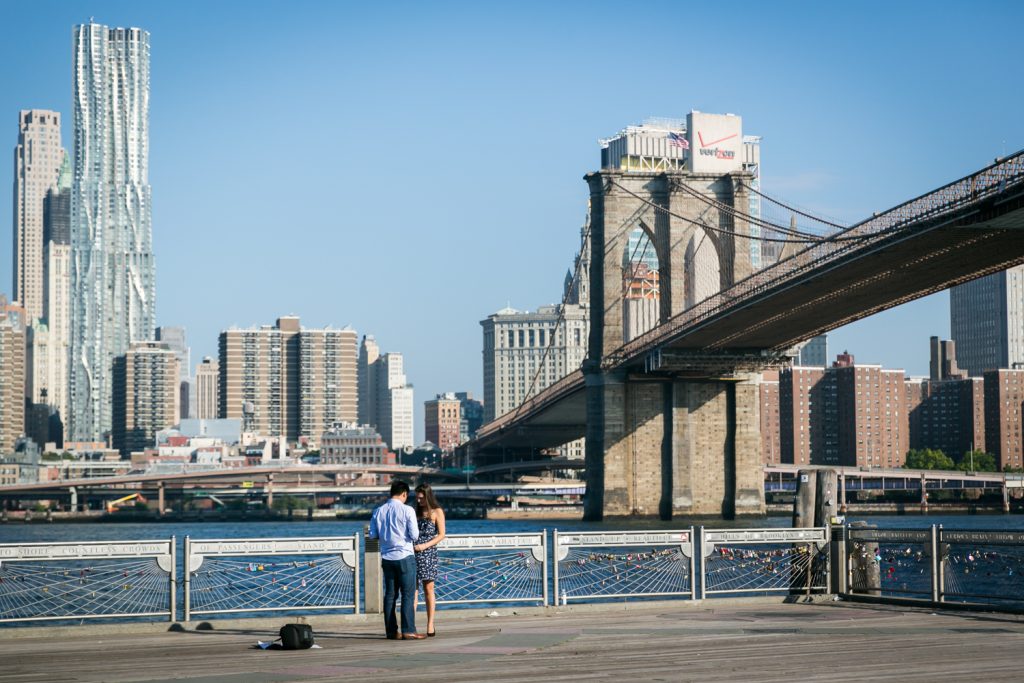 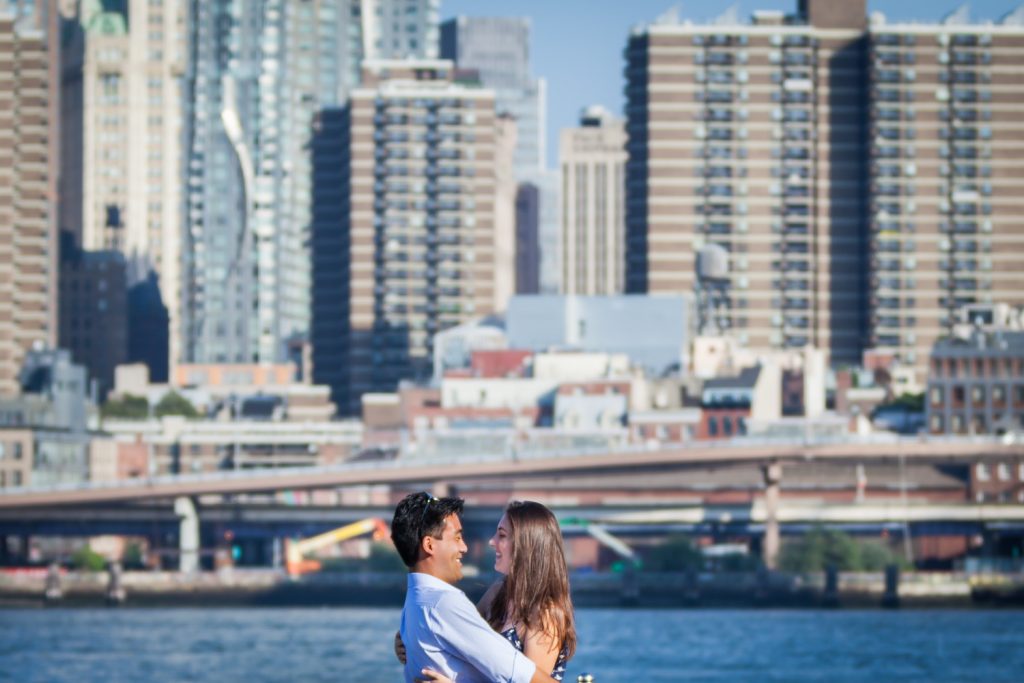 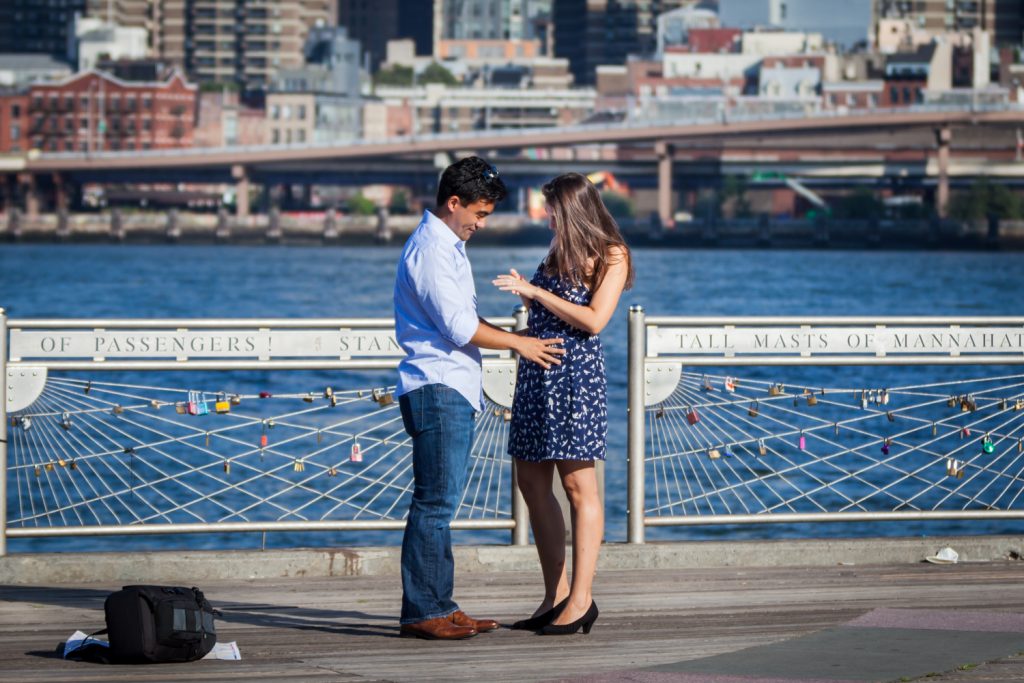 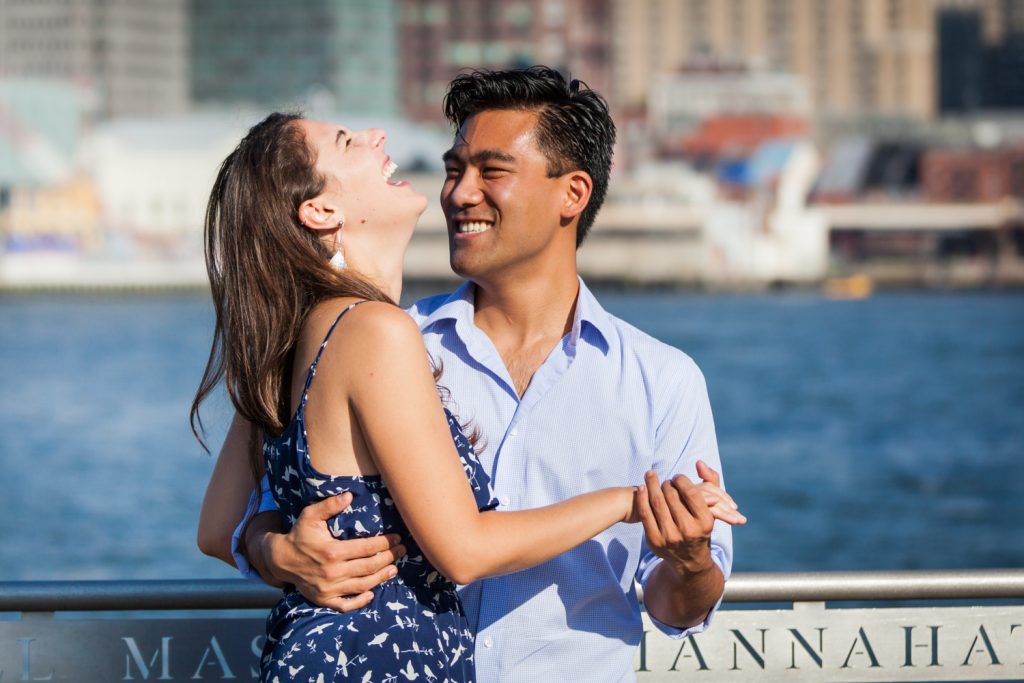 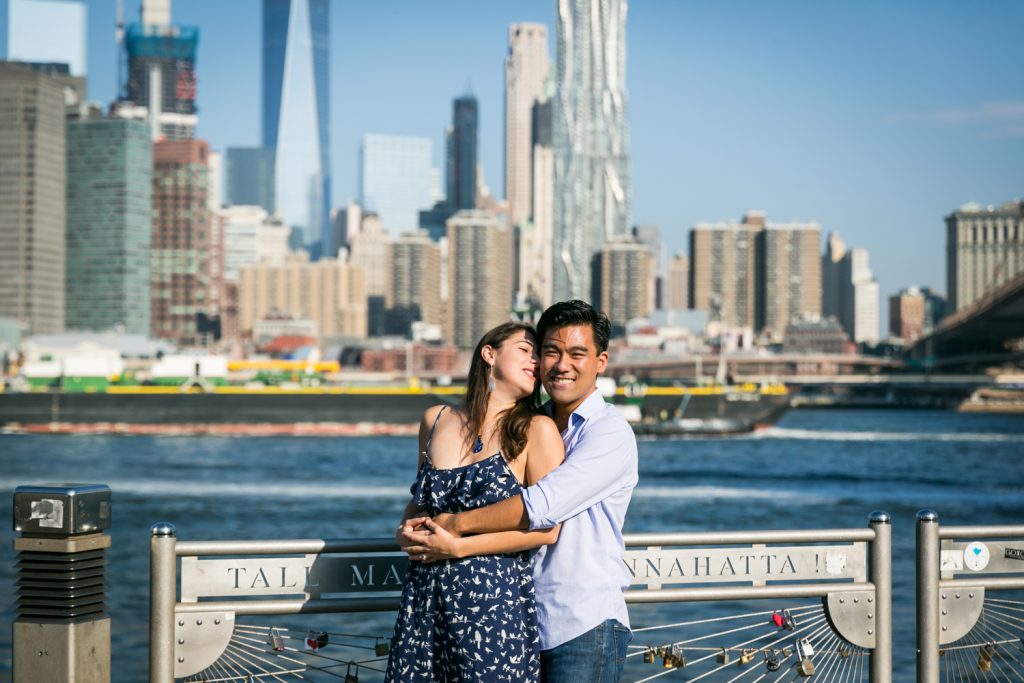 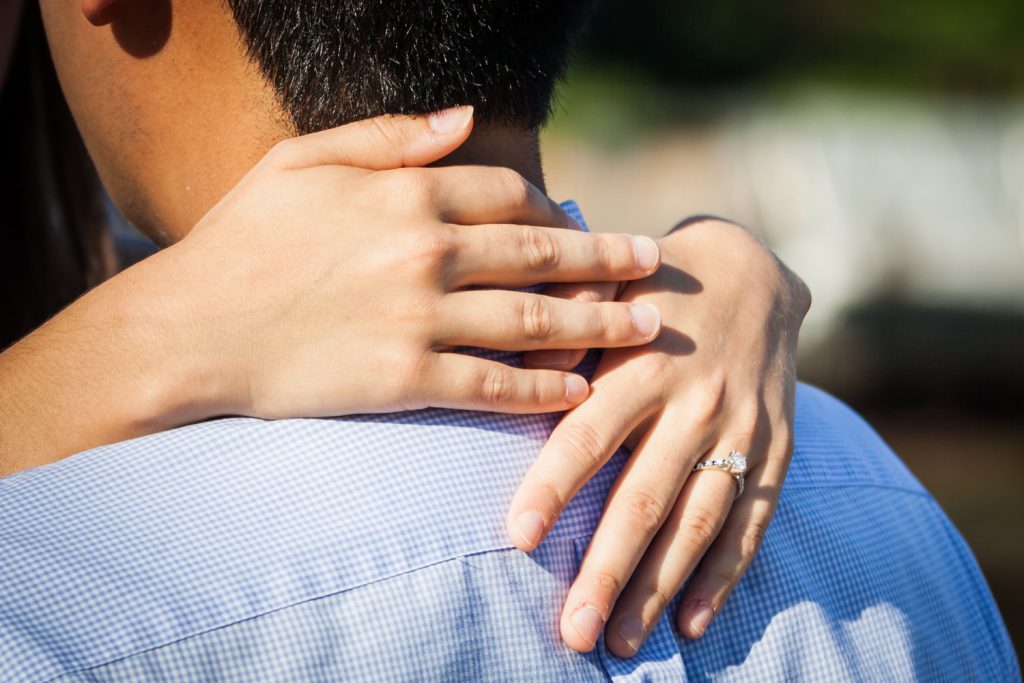 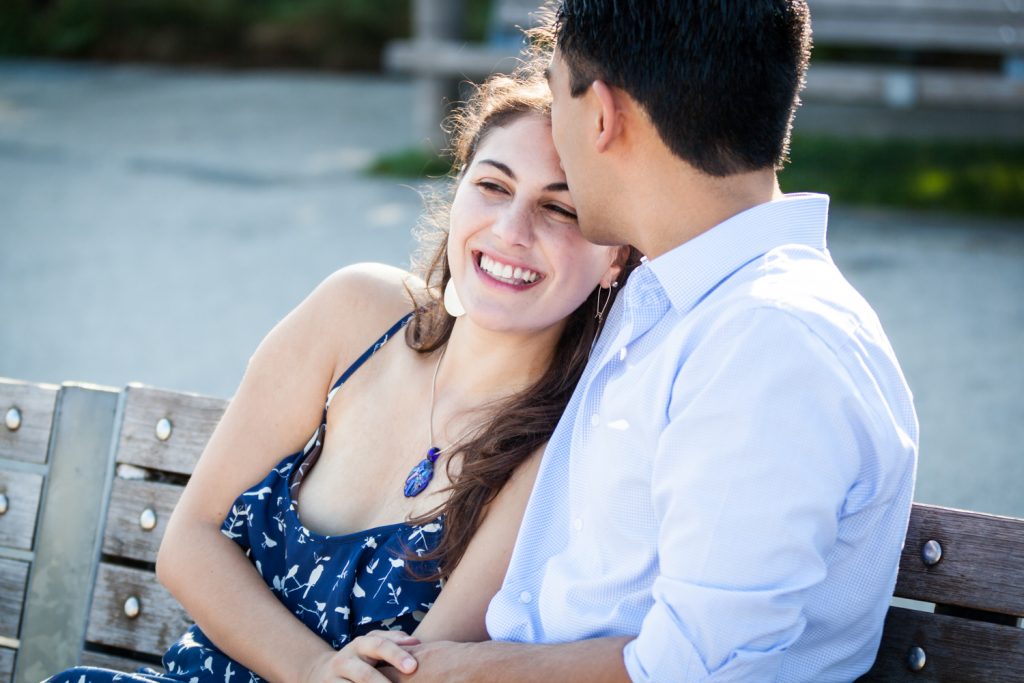 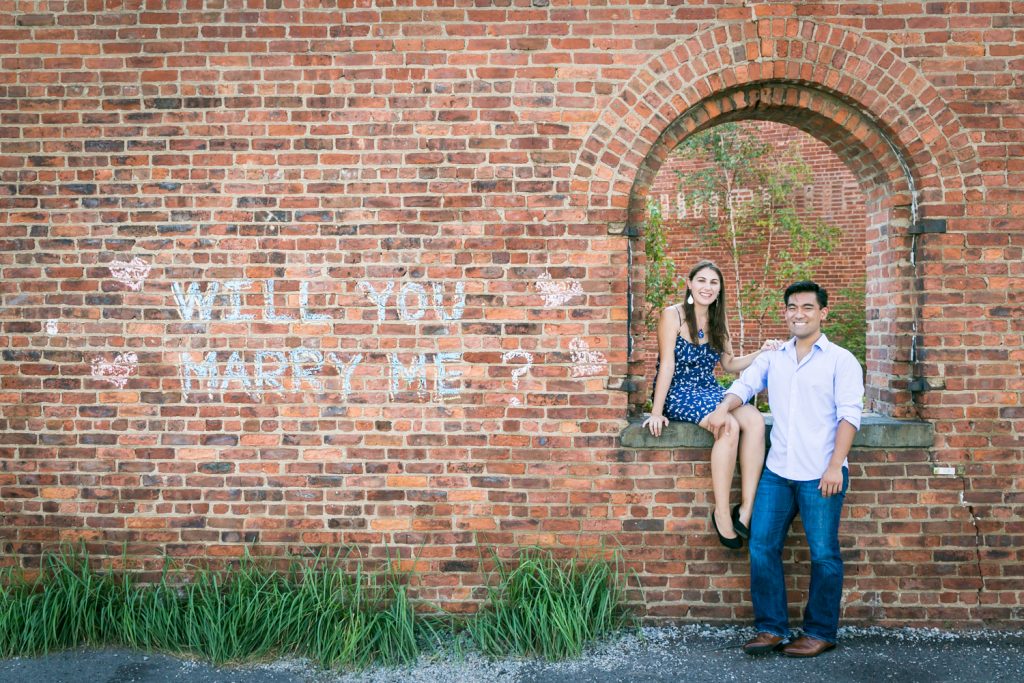 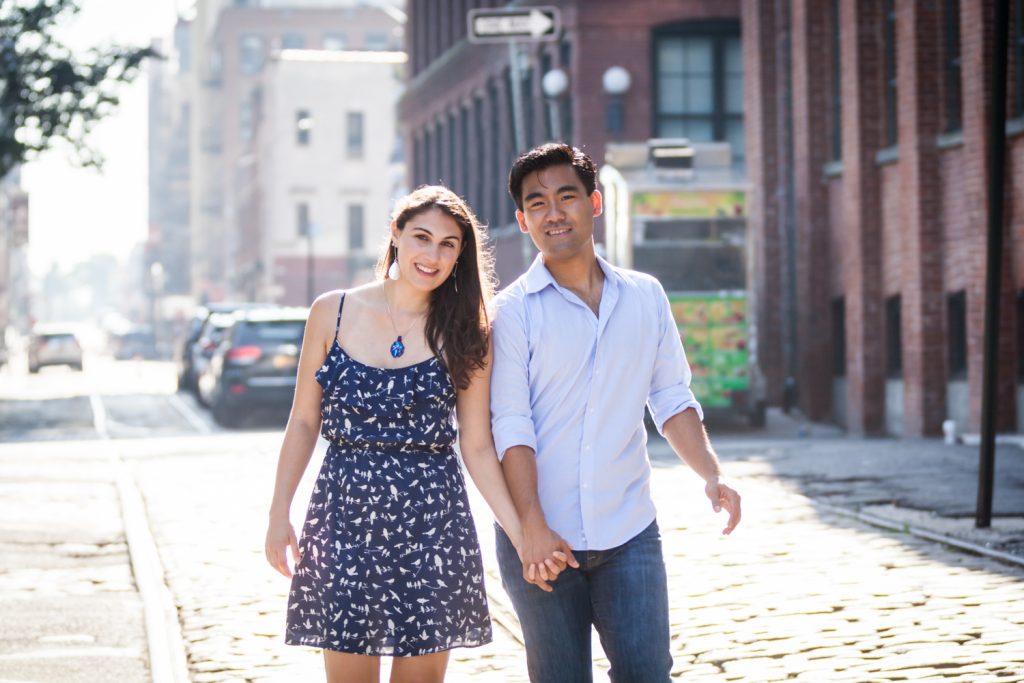 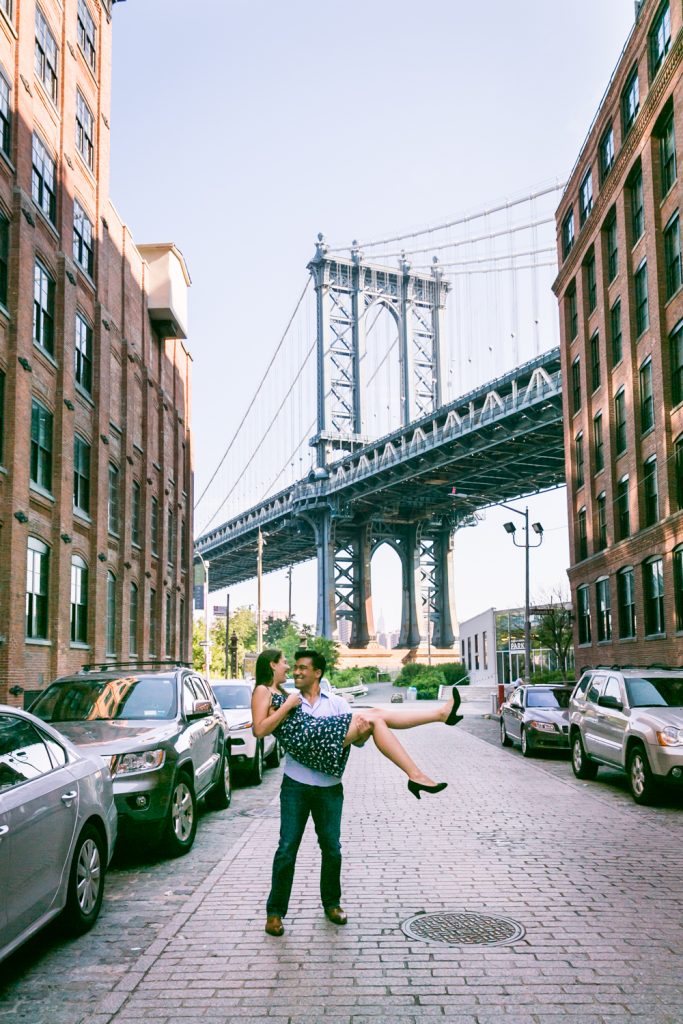 If you would like to see more surprise marriage proposal photos from my portfolio, please visit my website – www.KellyWilliamsPhotographer.com