Spread the News! Mark and Elena’s Engagement on HowHeAsked.com 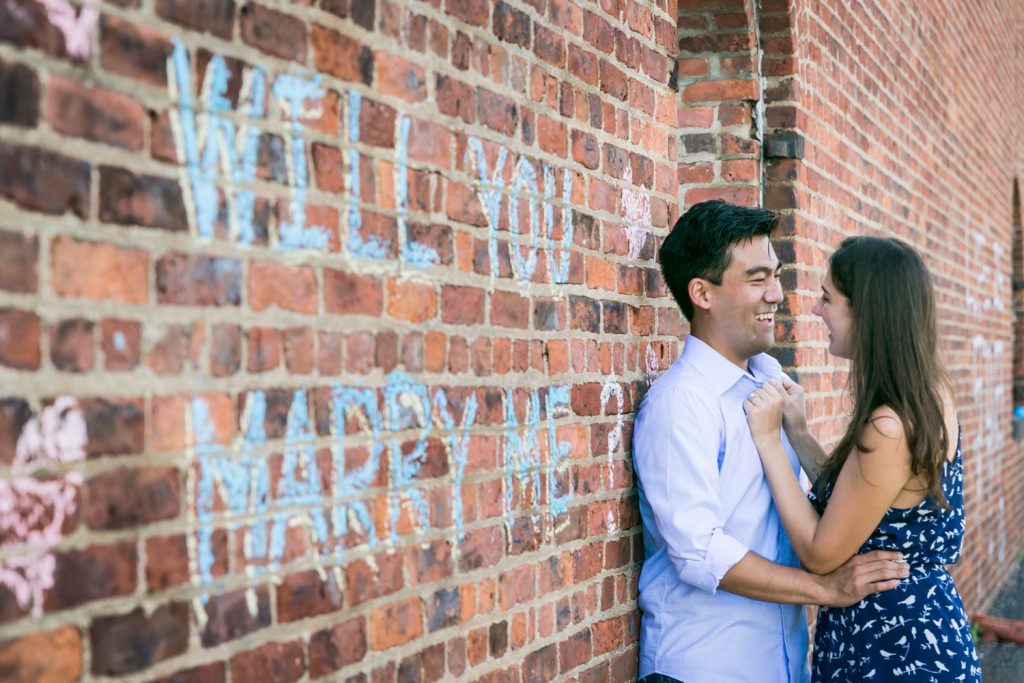 I am happy to announce that Mark’s surprise proposal to Elena made the pages of HowHeAsked.com!  Check out the links and all the details of this wonderful couple in love. In case Mark and Elena’s proposal is news to you, here is some information about the couple. Elena and Mark met as students at the University of Maryland. In Mark’s words, “I had just finished undergrad and was transitioning into grad school. Elena was finishing her last year of undergrad. Elena was leading an Alternative Spring Break trip to the Dominican Republic and I was attending as a participant. We spent a lot of time together on the trip and became really good friends afterward. A year or so later, our relationship evolved organically into something more!”

When Mark finally decided to ask Elena to marry him, the planning began. Though Mark and Elena live in Washington DC, they are huge fans of New York City, and had a weekend vacation planned for August. With the date of the proposal set, Mark and I discussed where to hold the proposal. To keep the proposal a surprise, I (and my large lens) needed to blend in with the crowd. As such, we decided on a tourist-friendly spot. In Mark’s case, we chose Brooklyn Bridge Park because it has a beautiful view of the NYC skyline. As luck would have it, the weather cooperated fully and we had beautiful light and the park entirely to ourselves. While the park was a tad empty for me to hide in, there is a bar on the ferry dock of Brooklyn Bridge Park that I was able to jump behind.

Mark’s shoot was scheduled for 8:00 a.m. both to catch the morning light and to avoid the afternoon crowds at the park. I had prearranged with Mark that I would be sitting on the bench in front of the Brooklyn Ice Cream Factory. He was to walk past me, onto the deck, and ask Elena to marry him. Great plan, but bad Uber driver. Unfortunately the driver took Mark and Elena to the other Brooklyn Ice Cream Factory located in Williamsburg (about fifteen minutes away from where they needed to be). Everything ended well, however, and Elena said ‘yes’!

Just as much planning went into the ring selection as did with the proposal itself. In Mark’s words, “I purchased the ring on Blue Nile, which is a great online store although they have a few brick and mortar stores. The site is great because it allows you to customize various options, particularly the diamond itself. I did a lot of homework beforehand and consulted Elena’s friends.” Some final notes on the planning of this surprise proposal: in addition to our initial phone call, Mark and I met in person so both of us knew what the other looked like. As with all my shoots, I always check in the night before via email and included a detailed description of what I would be wearing so I am even more easily identifiable.

Make sure you read all about Mark and Elena’s surprise proposal, plus that of other couples in love, on HowHeAsked.com.  And if you would like a few tips on how to ask your beloved to marry you, check out my article, ‘How to Plan a Surprise Marriage Proposal.’

For more images from my portfolio, please visit my website — www.KellyWilliamsPhotographer.com.